A literacy test given to black voters in the 1960s.


Unbelievable doesn't even begin to describe it.
U

I looked it up. It's just the third of it that was posted on Reddit. 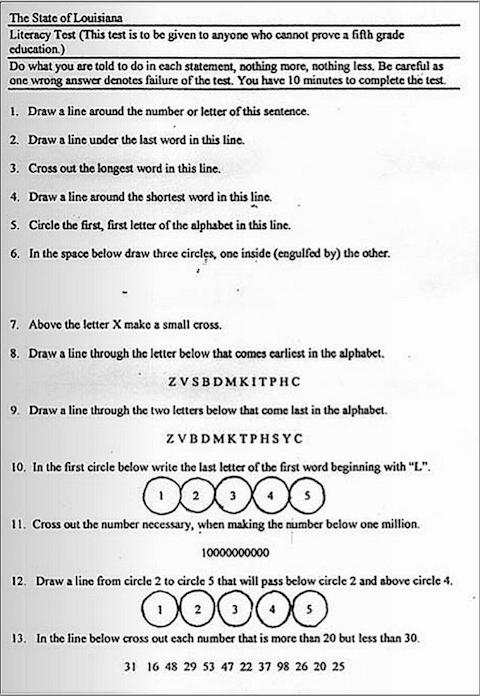 This summer, we revisited a literacy test from the Jim Crow South. Given predominantly to African-Americans living in Louisiana in 1964, the test consisted of 30 ambiguous questions to be answered in 10 minutes. One wrong answer, and the test-taker was denied the right to vote.

P_X said:
I looked it up. It's just the third of it that was posted on Reddit.

This summer, we revisited a literacy test from the Jim Crow South. Given predominantly to African-Americans living in Louisiana in 1964, the test consisted of 30 ambiguous questions to be answered in 10 minutes. One wrong answer, and the test-taker was denied the right to vote.

JFC are you kidding me!?

There were a lot of good reasons for the 1965 Voting Rights Act... and literacy tests were just one of them.

Crap how soon do we see this in Texas??

fooferdoggie said:
Crap how soon do we see this in Texas??
Click to expand...


Again, you mean? I don't think the part of the 1965 Voting Rights Act that prohibited literacy tests was overturned by SCOTUS.

lizkat said:
Again, you mean? I don't think the part of the 1965 Voting Rights Act that prohibited literacy tests was overturned by SCOTUS.
Click to expand...

Maybe they can just let private citizens sue anyone who aids or abets black people voting?

Ignoring the idiocy of making people take a test to vote, question 18 in @P_X's link has several answers. I take "next" to mean following the numbers that are given, indicating that they placed the blank in a misleading spot. For example, if it was 3, 6, 9, __, 15, you might assume the blank should be 12, using multiples of 3. If it was the sum of the 2 previous numbers and they really wanted whatever comes after 15, it would be 24 (this isn't to say that more patterns could not exist). These kinds of questions don't necessarily have a single unambiguous answer, which makes calling something right or wrong completely ridiculous.

tbh when I read now about how the Afghan Taliban are struggling to re-establish governance, because the Afghanistan they seek to govern now is not the Afghanistan of 25 years ago, Trump's hijacked GOP crosses my mind.

White supremacists of Trump's party, in seeming to strive policy-wise for dubious honor of becoming an "American Taliban", are up against not 25 or 50 but more than 150 years of American generational experience and relayed memories of the struggle for human and civil rights and the vigilance needed to maintain them.

The recent efforts of Trump-wing Republicans to make voting more difficult are a wakeup call against taking any of our understood American rights for granted. The further push now by the right against social contract investment is a reminder that it's not just "Democrats" in the GOP's crosshairs (and not just people of color). It's about women and any other group seen as potential threats to the old order of a white man's world. After all, it wasn't until 1968 that the last US state passed a law allowing women to serve as jurors, and the mid 70s in some states before women could get credit in their own name and control (not just own) real property.

The more difficult it is for people who are not white men to have agency in our economy, the more things revert to the bad old days when only white men ran this country. A lot of well meaning entities have got sucked into taking the wrong side in these budget arguments. Among them is the lobby for four-year colleges and universities, now engaged in trying to help the Rs ditch the idea of free two-year community college education for all Americans. The objection is being framed as based on lack of research that community college experience leads to success in the workplace.

The actual reason for that objection, however, is fear that free community college education will undermine viability of four-year colleges, and the four-year lobbyists are now touting reliance on Pell grants as a sufficiently successful way of educating more Americans.

Meanwhile the track record of Republicans in resisting expansion (or before that, the mere existence) of the Pell grants for university education is brushed aside... temporarily. Bottom line the GOP's track record for resisting aid to higher education for more Americans has been notorious.

Fear of the mere experience of diversity still runs really deep in this country, and the biggest threat to the old order is still a nonwhite kid with a library card.

Boeing CEO says company could walk away from 737 MAX 10

The USDA theft of farmland from black farmers