2012 Fiat 500-
This is not a bad story, and could apply to any vehicle.
The other day my Fiat started sluggishly. I drove away, came back, tried to leave again and the car would not start, and the battery would not turn the engine over. I charged it over night and in the morning, it did not have enough to turn the engine over, read about 11volts. Battery purchased 08/19, 3 year warranty, stinking hot Texas, returned it to the store and got a new one on the house, however as per store policy regarding warranty, the new battery’s warranty only goes through Oct.

The car could use a new clamp on the ground cable so I purchased one. The positive and ground cables have ring attachment which are bolted to to their respective clamps. This clamp has 2 bolts attached so I hooked up the 2 ground cables, attached the new clamp, but the car barely turned over, not enough to start the car, and then went completely dead. 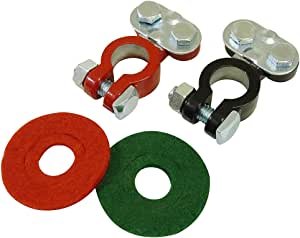 ​
Ok, so I thought, something else is going on And came >< this close to calling a tow truck, but decided to investigate some more. I verified the battery had a normal charge about 12.58V, I checked a couple of fuses like the main fuse, and the ignition fuse, among others, nothing out of order. Then I broke out my electric meter, set the meter to volts, and instead of placing them on the battery posts, placed them on the exposed part of each Positive and Negative cable. The meter read about 1 volt. I also checked the continuity of the connection from battery post to battery cable, it read hardly, if any continuity.

A closer examination revealed that the 2 bolts of this clamp weren’t designed to connect anything to them directly. I made a bad assumption. The intent is to slip a bare wire under a plate and by tightening the bolts press the wire, via the bar against the clamp body, achieving an electrical connection between the wire and the clamp body. Probably if I had stuck a piece of cable wire under the plate to make a better connection between the plate and the body of the clamp, this would have worked, but not as intended. I was just surprised these bolts did not make an adequate electrical connection with the body of the clamp.

I had messed with this long enough so I used the old clamp which is still functional, hooked up the barttery, and I now have a car that will start.

I’ll look for a battery post clamp that is made to have cables with a ring attachment bolted to it.

Good diagnostics and fix Yeah, just get some ring terminal battery clamps, the stuff on Amazon looks a bit junky, I'd probably order from Summit.

B
Why do they make this so complicated?

Power Tools: Anything and Everything