How long before this comes to the us? man this is so crazy.

In August police rounded up and paraded nearly 100 alleged dealers and users of the drug "bombe," which means powerful in the local Lingala language, following a call to action by Democratic Republic of Congo President Felix Tshisekedi.

"This social phenomenon calls for collective responsibility by the whole nation," Tshisekedi told ministers at a weekly meeting.

In an abandoned shack in a suburb of Kinshasa a young man seeking oblivion slits open a bag of brown powder, blending it with a couple of crushed pills using the back of a spoon, before snorting the "bombe" mixture, with his friends.

Within minutes the trio are swaying slowly, scratching themselves in a catatonic state that experts in Congo say can cause users to stand motionless for hours, or sleep for days.

"We used to drink very strong whiskey ... we were restless and we would hurt people," said Cedrick, a 26-year-old gang leader in a white designer shirt.

"But with bombe, it calms you down, you get tired, you stay somewhere standing up or sitting down for a very long time. When you're done, you go home without bothering anyone."

The brown powder is obtained from crushing the ceramic honeycomb core of automotive catalytic converters, the device that cuts the emission of toxic gases in vehicle exhaust pipes.

Mechanics blame rising demand for the drug on a rash of thefts of catalytic converters, which are coated with metals such as platinum, palladium and rhodium. 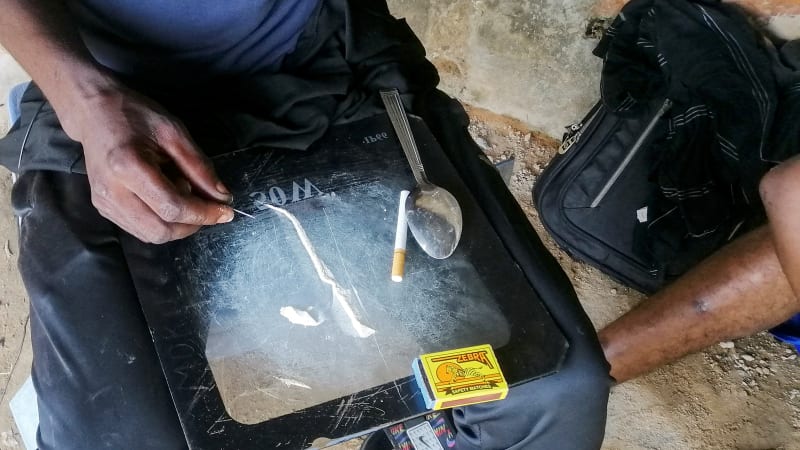 KINSHASA, Congo — A new craze for a drug derived from crushed vehicle exhaust filters is rattling authorities in Kinshasa, triggering a campaign to

LAX TSA let drugs and guns through for $200

Not every day that a police chief fakes his own death after stealing drugs from an evidence locker, $8000 from a child leukemia patient,