Over the weekend dug up some of our mature amaryllis plants to separate the bulbs that had grown up around the original bulbs. They have gotten quite large and where they started as a single plants, they are now a clumps of plants. The original bulbs were about the size of your fist or a baseball, but digging them up they had at doubled, tripled in size, this was also to make room for the 8 new amaryllis bulbs with fancy white blooms. My wife love these but they are a one trick pony all blooming at the same time which can be magnificent, but then they are done for the season. My wife has started adding some variety of bulbs. 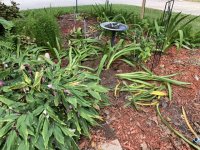 Our amaryllis patch end of season big bulb​
Some of our friends in the Twin Cities area wanted some of the spare bulbs discussed in a separate thread about shipping costs.

We just put down our first bulbs this year. Some are coming up already. It’s fun!

Saw a picture of a rat tail cactus which looked outstanding as a hanging plant in a hot climate. 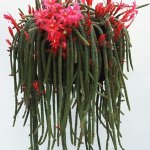 ​
Amazon had them at $55. Called around and went down to Cactus King in Houston who said they had them. Simultaneously impressive, a huge cactus yard and a mess with zero customer service and no toilets! 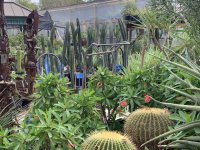 ​
And their two rat tail cactuses were barely hanging on, looking neglected. The place is designed for landscape contractors, not home owners. So I searched some more and found one on eBay, $12+ $8 for shipping from California and it looks great! Not sure why this is appearing on it’s side...​

Very similar to one we have. Alli said:
Very similar to one we have. View attachment 1039
Click to expand...

Love that pot, is it concrete or other?

Huntn said:
Love that pot, is it concrete or other?
Click to expand...

Concrete. Shipping cost more than the pot, but it was worth it.

Alli said:
Concrete. Shipping cost more than the pot, but it was worth it.
Click to expand...

There are several lawn ornament places around Houston with concrete ornaments and pots. The ornamental statue, a couple of urns and the sea serpent are our favorite. We brought the geisha down from Minnesota with us. 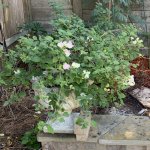 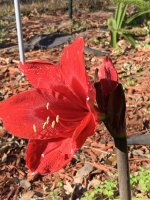 The Southern Weather disaster seems to have concluded and I’m looking at my once proud: 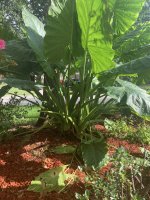 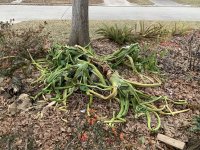 ​
Described as hearty in zones 9-11 (we are 9), it remains to be seen if this will rise like the Phoenix or have to be replaced...

Huntn said:
The Southern Weather disaster seems to have concluded and I’m looking at my once proud:
Click to expand...

Unfortunately, it looks very much like my yard. Almost everything took a hit. Surprisingly, the daffodils are still holding up their saucy little heads. Alli said:
Unfortunately, it looks very much like my yard. Almost everything took a hit. Surprisingly, the daffodils are still holding up their saucy little heads.


Have I mentioned that I just adore and absolutely love daffodils, complete with saucy little heads in a lovely, life-affirming shade of yellow?

Scepticalscribe said:
Have I mentioned that I just adore and absolutely love daffodils, complete with saucy little heads in a lovely, life-affirming shade of yellow?
Click to expand...

Why no! I don’t believe you have mentioned that...in this thread. LOL

Alli said:
Why no! I don’t believe you have mentioned that...in this thread. LOL
Click to expand...


Well, yes, my question was rhetorical: But, - herewith an aside and hint, both: I can never see (feast my eyes on) too many pictures of daffodils......

Scepticalscribe said:
Well, yes, my question was rhetorical: But, - herewith an aside and hint, both: I can never see (feast my eyes on) too many pictures of daffodils......
Click to expand... 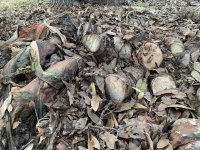 Can you see them?​

Scepticalscribe said:
Have I mentioned that I just adore and absolutely love daffodils, complete with saucy little heads in a lovely, life-affirming shade of yellow?
Click to expand...

We used to live on Daffodil Path, Minnesota cold weather warriors (Daffodils) and made sure we paid the name homage!

For anyone who likes gardening, I have to recommend Gardener’s World from the UK starring Monty Don. Very Zen like. It’s a great show with a large variety of guests and their gardens and is available for viewing in the US on, Acorn, Britbox, Amazon Prime, BBC2? and Dailymotion videos. My wife is a fanatic and it’s gotten her back out in the yard. All new season of this perennially popular gardening program returns with an all-new season budding with inspiring ideas and down-to-earth advice. [BritBox
www.amazon.com

28 March 2021
Besides the lone wolf amaryllis that bloomed in early Feb, all the rest are about to pop. Here’s one, front yard: 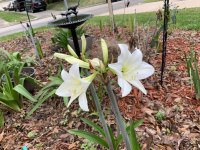 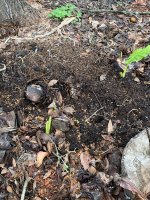 6 plant shoots in this photo
​
And we have decided to allow a little bird to have it’s nest under our gazebo. She’s not all that happy when we are hanging out back there, but it comes with the territiry she chose. I’ve not yet identified it, but it’s small with brownish red coloring, maybe a wren of some kind. Right now my guess is a House Wren or Carolina Wren. 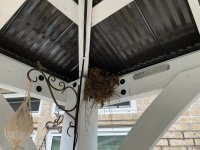 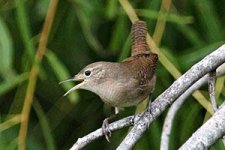 April 2021 flower bed Project
This strip of yard, approx 6x35’, the wife wants to turn it into a wild flower bed. The idea is that wild flowers should be relatively rugged and not depend on regular water as there is no sprinkler system in this part of the yard. So you know who gets to do the brunt of the work.

Since we live in a community that has covenants, I decided to run this by the home owner Association who approved, but I said flowers and mulch, not specifically wild flowers which can seen unruly. So we’ll see what kind of reaction if any we get from them. Anyway in the picture I just scalped it with the lawn mower, and per Monty (Gardener’s World), I’ve started to vigorously rake it to expose the dirt, not supposed to remove all of the grass.

Today, I’ll buy a stack of pavers to define the property line which will be flush with the ground (already checked and got an ok from the neighbor. I really need to get this area raked and the seeds spread as it is getting late in the season to start such plants. You want them going before it gets stink’n hot. And I’m going to drop a border of crushed rock around it using landscaping edging to make the area look more defined and refined to counter any unruliness of the wild fires themselves.

This area will also get some tuffs of ornamental grass and 2 Acoma dwarf (white) Crepe Myrtle bushes, 7-10’, but we will prune them as they commonly are around here to resemble trees, pruning them up with a couple of main stalks In the bottom 6’ or so. Typically each year, they are topped And new growth is encouraged.

So has anyone worked with wild flowers? I was surprised that they are typically sewed in existing grasses, but that makes sense when you see them growing in the wild in pastures. Any suggestions? 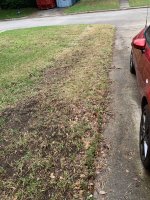 I’m in a condo but there is a planter outside. We put in mint and cilantro and dill last year. Mint and cilantro have already started to reappear. I replanted Dill seeds but no action yet.

Siri alexa and google are like living with toddlers.
2

Class warfare: starting your own city