Status
The first post of this thread is a WikiPost and can be edited by anyone with the appropiate permissions. Your edits will be public.

When trying to drag a window resize handle with stage manager enabled, sometimes you can’t. The issue seems to occur when two handles from two windows overlap (or nearly overlap)​
​
Not a bug (probably), but tapping the background when in stage manager feels like it should reveal the springboard, but it does not.​
​
Not a bug (probably), but apps that are designed to run full-screen cannot “window” with other apps; because of that, they should just automatically run full screen in stage manager, and not be shrunk to a smallish window (that can be manually maximized). This is especially the case if you are using stage manager without the dock and the recent apps list.​
​
Maybe a bug: when a window is not maximized, certain gestures don’t work (like tapping the top of the window to jump to the top of a list)​
​
It’s difficult to tell what the apps in the stage manager app list are sometimes, because they are small screenshots and aren’t labeled.​
​
Scrollbars: sometimes the vertical scroll bar that shows up when you scroll UITableViews is in the wrong place when the window is not full-screen - the scroll bar shows up sometimes in the middle of the window. Killing the app and restarting solves it. So far I’ve only seen this twice, both times in Mail.app.​

Opening a book shows no text - you can turn from page to page, but all the pages are blank. UPDATE: turns out the issue was that Books.app adds some new text customization options, and it defaulted, in my case, to white text on a white background. It may have something to do with a bug where it doesn’t like when your device is in night mode even though it is day time.​
​

Not a bug, but an annoyance: the same “left arrow” icon means “reply” at the top of the screen but “miscellaneous things you can do” at the bottom of the screen.​
​

Using MobileIron MDM, apps that are managed by MobileIron and which need to launch MobileIron in order to start up don’t work because MobileIron crashes before it returns control to the app you are trying to launch.​
​
Bugs when using physical keyboard:​
​
Both of the following problems appear related to the app sometimes reserving space for the soft keyboard even though the soft keyboard is not present:​
​
In Duolingo, while doing lessons, the text and controls jump around, as if the app gets confused about the window size.​
​
In Citrix, a keyboard bar runs horizontally across the middle (vertical) of the screen, just above where the soft keyboard would be if there were one.​
Last edited: Jun 7, 2022
L

The iOS and watch betas drain my battery real bad, no idea whether it’s a common problem or not…

leman said:
The iOS and watch betas drain my battery real bad, no idea whether it’s a common problem or not…
Click to expand...

Not too unusual for betas. Not seeing much difference on ipados so far.

Playing around, I think my mobileiron issue is that it is trying to read the pasteboard without the newly required permissions, and dies. I don’t see anywhere to enable the permissions in settings.app, so it might require a second beta or update to the app. 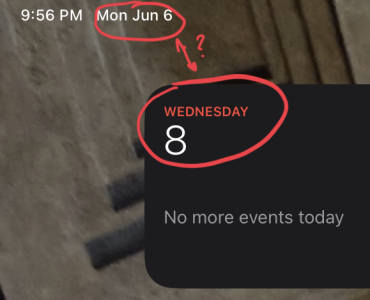 And the date changes depending on what app I launch. It’s like it gets stuck on whatever day I first ran it after the update?

And the date changes depending on what app I launch. It’s like it gets stuck on whatever day I first ran it after the update?
Click to expand...

Nah, I’m pretty sure you have a time machine and you’re not telling

Was running Beta 2 on my ipad for less than 10 minutes and had the “system swipes don’t work” issue already once. It’s pretty annoying. The issue with mobile iron launching other apps and crashing still not resolved (but I am more confident now that it is an issue with failure to obtain clipboard permissions)

Apples software is beta after release anymore why would you want it before that??

fooferdoggie said:
Apples software is beta after release anymore why would you want it before that??
Click to expand...


To test it and submit bug reports?

These betas are far more stable than the last couple of years.

Cmaier said:
To test it and submit bug reports?

These betas are far more stable than the last couple of years.
Click to expand...

I test for bugs every day and keep finding them you ever use Siri???