Maybe Biden was Q all along?

"Mods please explain why Biden isn't arrested yet" would be an awesome PRSI thread.

Big revelation for Trump supporters: your Q was about as real as this one. 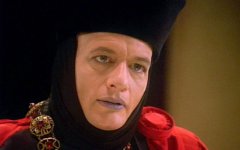 ​
As far as Q people being upset, four years ago YouTube was filled with Trump election victory videos followed by tons of sickos who were absolutely delighted at how shocked the libs were.

I think decent people could be excused now for lording it over the Trump zombies in much the same way.

Give them a few weeks for this to sink in for good and that’s when they’ll become dangerous.

A cult in search of a leader sounds even scarier than a cult with a leader: they will flock to the first Messiah willing to step up.

I ignored this thread all day because of the title and I didn't want to read a thread dedicated to the conspiracy.