At the moment, the ODIHR (Office for Democratic Institutions & Human Rights) the democratisation and "human dimension" and election monitoring/observation arm of the OSCE (Organisation for Security & Co-Operation in Europe) has a LEOM (Limited Election Observation Mission) of international observers actually observing the US general elections (including the presidential election).

This is one of the bodies I have been worked for, or worked with, or been seconded to, when observing (or monitoring, or supervising) elections (the other is the EU; the third body considered credible and reputable in the field of international election observation is the Carter Centre).

Anyway, I've been keeping an eye on their website during the course of the campaign and have been waiting for this: They have just released - on October 22 - their interim report which is well worth a read.
Last edited: Oct 25, 2020

niji said:
thanks very much.
i read the report and thought it was a great, independent, fair, balanced, and very human-level report with sound analysis and good recommendations.
i am embarrassed for america to have needed this report.


I strongly recommend reading it to everyone who is interested in the US election.

Two further reports should (or can) be expected from the OSCE/ODIHR on the US elections: The first will be - or, goes by the name of - the "Preliminary Report". This will be issued the day after the election (that is a nail biting exercise, and delicate balancing act, usually both electorally and politically, as you need to get it out in time for the initial press conference, delivered usually at around 4 pm the day after the election, in the capital of the country where the election has been held, but every fact must have been verified and comments and criticisms discussed; I've been up all night writing sections of such reports, and, of course, the outcome of the election might not be clear, nor the counts concluded, by the time it is published).

The Preliminary Report is followed - usually around six to ten weeks later - by an exceptionally detailed and usually quite meticulous Final Report.

However, the Preliminary Report is exceptionally important, especially in the context of the current US election, and, above all, in any election where competing narratives as to the validity of the electoral process exist, or occur.

Of course, the irony is that normally, it is the incumbent dictatorship, or authoritarian regime, - with all of the advantages of incumbency - including what is coyly termed in official reports "an abuse of administrative resources" (and this - to my astonishment - has also arisen in the current US election) - i.e. the incumbent has used government (rather than party political) resources to seek re-election - that will attempt to argue for the validity of the entire electoral process, while the excluded opposition will seek to present arguments as to why it cannot be deemed a free and fair election and why the results or outcome should not be recognised nor allowed to stand.

Thus, for the OSCE, it will be important for them to have their initial, immediate, post-election narrative released as soon as is practicable, or possible, so that other, alternative "fake" or "false" narratives are not dominating - or allowed to donate without being challenged by alternative, credible, reports from reputable sources - the airwaves first.

It is most unusual for an incumbent - with all of the advantages of incumbency at their disposal - to cry "foul" and "fraud" persistently, and to seek to sow discord and disbelief in the actual capacity of very institutions of the state in advance of an election, by questioning their ability to be able to run an election properly, and to query their capacity to count the votes - and record the votes counted - fairly and accurately, in a way that reflects the votes cast by the electorate.

Anyway, I've worked for (with) the OSCE in the field of election observation since the first elections were held in Bosnia in the mid 1990s, after the signing of the Dayton Accord formal put a end to the Yugoslav civil wars, and, in that time, have observed (or supervised, or monitored - the verb used depend on your mandate) over 25 elections across three continents; I've also worked with the EU as an elections' specialist, and political counsellor (adviser).
Last edited: Oct 25, 2020

niji said:
thanks very much.
i read the report and thought it was a great, independent, fair, balanced, and very human-level report with sound analysis and good recommendations.
i am embarrassed for america to have needed this report. 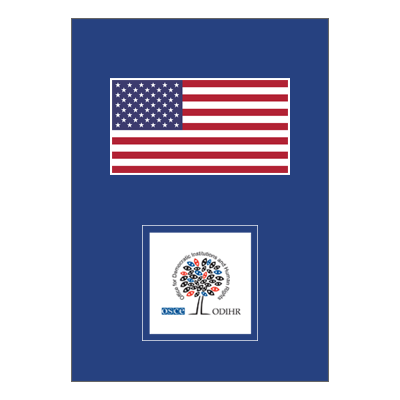 Here is the OSCE/ODIHR interim report, on the US election, and it is well worth reading.

Amnesty International issues a warning about The United States:

And it appears that the current administration has plans to tighten up how visas are issued to foreign journalists covering the US (i.e. issue them for shorter periods of time, or validity), with the intention of "improving" the tone of foreign media coverage of the US.

If this occurred in Belarus, or Russia, or a state with similar authoritarian tendencies, there would be uproar.

In a significant shift since 2000, the GOP has taken to demonising and encouraging violence against its opponents, adopting attitudes and tactics comparable to ruling nationalist parties in Hungary, India, Poland and Turkey.

The shift has both led to and been driven by the rise of Donald Trump.
Click to expand...

By contrast the Democratic party has changed little in its attachment to democratic norms, and in that regard has remained similar to centre-right and centre-left parties in western Europe. Their principal difference is the approach to the economy.

...The study, published on Monday, shows the party has followed a similar trajectory to Fidesz, which under Viktor Orbán has evolved from a liberal youth movement into an authoritarian party that has made Hungary the first non-democracy in the European Union.
Click to expand...

India’s Bharatiya Janata Party (BJP) has been transformed in similar ways under Narendra Modi, as has the Justice and Development party (AKP) in Turkey under Recep Tayyip Erdoğan and the Law and Justice party in Poland. Trump and his administration have sought to cultivate close ties to the leadership of those countries.
Click to expand...

...The institute has found the decline in democratic traits has accelerated around the world and that for the first time this century, autocracies are in the majority – holding power in 92 countries, home to 54% of the global population.
Click to expand...

Belarus: Hoof-Beats of the Horse of History Stuff/Post-Election Events
2

Russia and the UN Security Council

If your loved one passes away while waiting in the security line, the TSA will be happy to hand-screen her and get her on her flight