As Republicans dig in their heels on the concession of Donald Trump, Mike Pompeo's reaction to reporters' questions, which were obviously telegraphed, shows there is no sign that they will honor the will of the people. 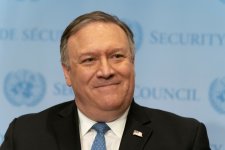 I wonder how Mikey P will transition to prison life.

And there is a school of thought that suggests expressing sympathy and extending sensitivity towards the deeply hurt feelings - hurt because of electoral humiliation - toward these people who are still, still, still, doing absolutely everything in their power to frustrate, deny, thwart and obstruct the democratic will of the people?

I was willing to give him the benefit of the doubt and think he's just yanking our chains...


So a smooth transition like Trump getting shot out of a cannon now, taking a leisurely arc through the heavens and splash-landing on the Republican primary calendars around the time Kamala Harris' 2nd term is getting ready to wrap?

And it will be fun to see Trump take on Prez Harris' erstwhile VP AOC since by then she'll be old enough to see over the dashboard of whatever muscle car Joe Biden has loaned her for the occasion. I bet she's a hoot and a half in a Trans Am taking on DonnyBoy in his golf cart.

Edit, on topic: oh yeah. Pompeo is full of it.

Esper recently said "Who’s going to come in behind me? It’s going to be a real ‘yes man.’ And then God help us."
Click to expand...

Yep. Previous claim to fame? Aide to one Michael Flynn.

Some career bio info from Wiki -


Cohen-Watnick was brought into the United States National Security Council by Michael T. Flynn, the former Director of the Defense Intelligence Agency and President Donald Trump's first National Security Advisor. He was named the NSC's Senior Director for Intelligence Programs.​
​
This directorship was intermittently held by detailed CIA officers. Like Cohen-Watnick, the immediate preceding Senior Director from the Obama Administration was a political appointee. Some viewed Cohen-Watnick's appointment as a sign of Trump's mistrust of the CIA. Following Flynn's resignation in February 2017, the new National Security Advisor, H. R. McMaster, attempted to remove Cohen-Watnick, but he was overruled by Trump​
​
The White House announced Cohen-Watnick's dismissal on August 2, 2017, following policy disagreements with National Security Advisor H.R. McMaster over Afghanistan, Iran, and Intelligence Oversight. According to The Washington Post, Cohen-Watnick resigned following a power shift under McMaster.​
​
Upon Cohen-Watnick's departure, the White House commented that "General McMaster appreciates the good work accomplished in the NSC's Intelligence directorate under Ezra Cohen's leadership... General McMaster is confident that Ezra will make many further significant contributions to national security in another position in the administration."​
​
Yeah, well... "he's baaaaaack... and at the Pentagon."

I remember him. And when he was last in the news. Not a nice fellow. Perfect for Trump.

Alli said:
I remember him. And when he was last in the news. Not a nice fellow. Perfect for Trump.
Click to expand...


Yes, as my maternal grandmother, - who was a teacher - used to say, approvingly quoted by my mother, "Show me your friends, and I'l tell you who you are."
Last edited: Nov 11, 2020

When do we start getting scared?
I'm reaching the end of just being, concerned.

Is Trump really looking to pull off a coup?

Or is all this just buying him time to do… god knows what.

I believe he’s heading towards a coup. As more and more lawsuits are thrown out, as no one finds evidence of fraud, he is becoming bolder, more desperate and more unhinged. Replacing Pentagon officials with his henchmen, with neither Pence nor the Cabinet apparently inclined to invoke the 25th...yes, we are in danger here.

That so many Republicans are remaining silent or even cheering him on tells us the corruption in the party goes to the bone.

When do we start getting scared?
I'm reaching the end of just being, concerned.

Is Trump really looking to pull off a coup?

Or is all this just buying him time to do… god knows what.
Click to expand...


Hard to say. In my book it's ok to prepare effective resistance against a coup and still keep trying to laugh Trump offstage at the same time. I'm no military strategist but I've stepped in to run a household full of kids now and then in my time. Keep 'em off balance always worked for me.

The competing theory to the one about a coup though is that the Trump guys just need time to finish covering up a lot of sh^t, which seems plausible enough. Shredding and fabricating, hand in glove...

It may be hard for Biden to piece together what all has transpired in the past four years that was not made public or on which they will "forget" to brief him now.

Still there are people who know stuff. You can't unmake the past, even if you call it by some other name or tear up the authorizations or fire the people who were supposed to paste the pieces back together.

More concerning perhaps is Trump plugging these Nunes-circle people into Dept of Defense, they are loyalists who had somehow* managed to make it onto his ever changing National Security Council and so now may be difficult to dislodge from the high echelons over at Defense. Are they there just to be eyes and ears (and leakers to Trump allies in or out of US government) or are they put there now to deter future inquiries from within about what happened on Trump's watch?


*if Kushner can skate on clearance issues then anyone can, if a loyalist.​
So.. a potential internal threat to the USA's interests, or just Trump giving the finger to Biden on his way out? Biden will decide... and go find some fine print or have legal counsel justify rollbacks of whatever Trump's doing at DoD right now.

What goes around comes around should be on coffee mugs of the GOP for the next four years except in the probably only narrowed-margin bailiwick of McConnell's Senate. But even there does Mitch imagine the Democrats will not adopt the tactic of appointing "Acting..," chiefs and deputies if push comes to shove on agency-level confirmations?

By time this century reaches the half mark, every little principality on the planet will know how EOs work in the American government, and what the arcane rules are that allow the US Senate to run the Congress, the courts and the executive branch (and agencies) of this country. Trivia game gold.

the thing we can count on trump is terrible about hiding his plans and fairly incompetent about carrying them out.
U

ericgtr12 said:
As Republicans dig in their heels on the concession of Donald Trump, Mike Pompeo's reaction to reporters' questions, which were obviously telegraphed, shows there is no sign that they will honor the will of the people.

I love these videos, you just look very closely for facial microexpressions. He keeps a straight face throughout, but then he laughs proudly like "i'm trollin ya and I love it". At the end of the day, it does tell you what you need to understand about this. He knows this is laughable bullshit, he just still thinks there's more in there for him than to break ranks. Trump really managed to collect all the invertebrates he could find.

PearsonX said:
He keeps a straight face throughout, but then he laughs proudly like "i'm trollin ya and I love it".
Click to expand...


Pompeo, gee. This is a guy who about a year ago posted a summary of his "How To Be a Christian Leader" speech in Nashville (to a group of Christian counselors) on the State Department website... toned the title down after complaints about separation of church and state... and finally removed it like four days later.

"The Department of State looks more like it should be representing the Republic of Gilead from The Handmaid's Tale than an America that respects religious equality under the law."

What I dislike most about him is his willingness to put words in someone else's mouth that are contrary to what was said, even as he also redefines what he himself has said to make it seem more appropriate or acceptable.

For instance a Muslim organization's spokesman, when asked about reaction to that speech title being on the State Dept website, remarked that it would be fine for Pompeo to speak in public to any religiously oriented gathering --including Muslim ones, of course -- but not for Pompeo to present himself in his State Department role as "a Christian leader."

Meanwhile Pompeo in that particular Nashville speech had included a media-troling line that went "I know some people in the media will break out the pitchforks when they hear that I ask God for direction in my work..."

The media do go to the trouble of obtaining public reaction to this kind of stuff and religious spokesmen do make it clear they understand the separation -- and how it accommodates religion in the public square but not the state's selection of one religion.

But Pompeo? He just bulldozes all that away with a slur aimed at the media and emphasizing at least he knows it's fine to talk about "God" in a speech, thereby completely eliding the facts that matter: that that was a taxpayer-funded trip to Nashville and a speech on how to be a Christian leader posted on a US government agency website's home page. [ Jesus Christ! ]

Arkitect said:
Or is all this just buying him time to do… god knows what.
Click to expand...

I’m not sure what. I hate that he’s getting any time. I would not put a coup past him. The question is, since we have already had the election, what will our military leaders do?

Alli said:
I’m not sure what. I hate that he’s getting any time. I would not put a coup past him. The question is, since we have already had the election, what will our military leaders do?
Click to expand...


Yes, these thoughts are an uncomfortable echo of my own.

I think that he is planning a coup, or planning to destabilise the country sufficiently so that he can invoke the Insurrection Act or something similar.

I hate the fact that nobody (well, hardly anyone) in the GOP is challenging this appalling behaviour, this baseless and mendacious narrative or this outrageous constitutionally irresponsible (and illegal) behaviour.

I still recall with horror how nobody in the GOP (and their enabling fellow-travellers) pushed back in 2016 when Mr Trump made clear that he wouldn't accept the election result unless he won.

All they needed to say then was something along the lines of "of course, we'll concede/accept the result if we lose, but we think that we won't need to do this as we believe that we will win."

Even that pathetically low bar would have been acceptable, but no, even then, they couldn't even do that, and they weren't called on it because Mr Trump won the election.
Last edited: Nov 12, 2020

US intelligence stops in-person reports to Congress on election security