So instead of clogging up the TFM thread with individuals who's claim to shame is political, I present...

Starting with an old favorite 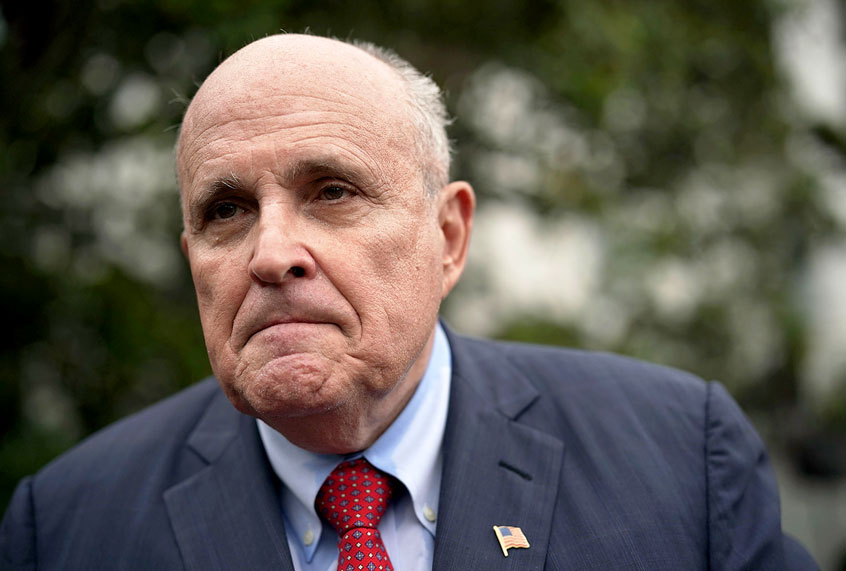 Rudy Giuliani's invisible company got PPP money — but where did it go?

Giuliani's payroll company got a PPP loan from a Trump-friendly bank — but lists no employees. Was it fraud?

JayMysteri0 said:
When the 'F' did we become a country with two different types of states, where countrymen's deaths are counted separately?!
Click to expand...


This administration has removed the “United” from United States.

JayMysteri0 said:
https://twitter.com/i/web/status/1306376213477363719
When the 'F' did we become a country with two different types of states, where countrymen's deaths are counted separately?!


Does this mean I can tell the R's in my state to GTFO? "Go back to your own state!"

Let's not forget the ladies

rdrr said:
Does this mean I can tell the R's in my state to GTFO? "Go back to your own state!"
Click to expand...

No. They are needed for your security, they are the only ones this administration will "trust".

And a very special full uppercase in bold THIS FUCKING GUY for...

...And making sure he doesn't stay off the list

Because you knew he'd find his way here

I almost regret now that I ever gave Trump the typical (for me anyway) benefit of doubt at the beginning of his presidency. I did not vote for him, was shocked and disappointed that he won, but I'm an American and so of course I would like to see my country thrive no matter who is president. So I hoped he could somehow assemble a competent team and govern well.

Who the hell was I kidding. I knew what we'd elected. I just didn't know how to deal with it. And I still don't. Neither did his own hijacked party... but at least I knew it was right finally to impeach him and so wrong for the craven, sycophantic Senate to throw a sham trial, to trivialize the seriousness of the charges and dismiss them out of hand as they did.

This guy Trump should have been thrown out of office almost as soon as he was sworn in... the Rs should be thanking the Dems for our forebearance. By all regard for the Constitution and for presidential norms going back to previous centuries, the guy should have been gone well before he got around to inking the GOP's unfunded tax cuts and rule rollbacks. As for his cabinet appointments (and his end runs around Senate confirmation of replacements for a lot of them).

So yeah, F this guy Trump. Time for him to go. I hope he goes peacefully but wouldn't mind seeing him dragged off foaming at the mouth by the marshals or secret service or whoever would draw the short straw and end up with that assignment.

One final enormous "THIS FUCKING GUY" for the night

One final enormous "THIS FUCKING GUY" for the night


Yeah we can hope the end is in sight. Trump and McConnell's GOP will go all in this season although this kind of stuff is dicey (and the RNC knows it and so do some of Trump's campaign staff). He's pandering to a shrinking base of now very loud white supremacists. The downside for Democrats is that their natural and justifiably negative reaction to Trump's provocative announcement takes everyone's eye off both Trump's failure to deal in competence with covid-19 and the refusal of the GOP to lavish in further economic stimulus for ordinary people a tenth of the dough they lay out for the Pentagon and in tax waivers for the 0.1% amongst us.

But it cannot seem right just to sit back and roll eyes when a US President decides to celebrate with a new federal statue a particular signer of the Declaration of Independence who was a slaveholder. Of course Rodney was not the only slaveholder among his peers. Our history is what it is and slavery had not been abolished at the time our Constitution was being written. However, the Caesar Rodney statue was recently removed from public view in Wilmington, Delaware, the capital of the guy's home state. It was stored temporarily (along with a statue of Columbus, also removed) while the city prepares to consider and debate how it wants its early history to be represented nowadays in public.

Trump's gesture and the timing of it are clearly partisan pandering to white supremacists, and also meant to distract voters in both parties from issues related to Trump's dismal track record and failure to uphold his oath of office on behalf of all Americans for the past four years.

Soledad has always been a respectable journalist IMO, yes she leans left but she's also very much a philanthropist and is always thinking about those less fortunate.

Trump still keeps ending up at how covid-19 is no big deal. Can't stop himself from going there.

lizkat said:
Trump still keeps ending up at how covid-19 is no big deal. Can't stop himself from going there.

Biden still has an average lead of 7 points nationally, if he can hold that (still doing well in battle ground states) then we have a decent chance. It's obvious that people will continue to die in huge numbers until he is out of office.

Here's the latest in polling from NPR, we just have to stay on it.

Making sure the ladies get their time to shine.

https://twitter.com/i/web/status/1308418108772712449
This is why you do not put donor hacks in gov't positions, because they can't be bothered to grasp what's involved in being in such positions.