Time for something different & very bias, a reverse TF guy.

I WANT more of TF guy leading a country, and not a damn self financially motivated sociopath!
Registered users do not see ads, it's free and easy. Register Here

In my Samuel L Jackson voice, "Mutha Fuckah What"?!!!

I hope that one is laughed right out of court.
S

A whole video of TFG’s... what is wrong with Republicans in Idaho? Gotta love the Lt. Gov. using a Bible AND a gun as props....

CNN is not playing

A distant TF Guy, based on remembering what we had until the current TF Guy

Just a quick reminder about a regular member of this thread

In trying to avoid accusations of anti-conservative bias, Facebook has reportedly held off on punishing allies of President Donald Trump who repeatedly violate its rules against misinformation.
gizmodo.com
Click to expand...

In trying to avoid accusations of anti-conservative bias, Facebook has reportedly been bending the rules for high-profile Republicans. Sources told the Washington Post that Facebook has held off on punishing President Donald Trump’s family members and other conservative groups and personalities who repeatedly violate its rules against misinformation, even removing strikes in some cases. And it did so out of fear of the “backlash” that could ensue from enforcing these penalties.


Around the end of last year, Facebook pulled a repeat infraction claim against Donald Trump Jr. for posting misinformation on Instagram to avoid having to label him a repeat offender, two former Facebook employees told the outlet. This saved the president’s eldest son from incurring penalties such as reduced traffic, demotion in search results, and a temporary block on advertising. One former employee said other Trump family members have received similar preferential treatment over the past year, and that this was just one “among numerous strikes removed.”

For example, one of the largest group supporting the president’s reelection bid, the political action committee America First Action, posted two videos within a four-day period that falsely claimed Democratic presidential nominee Joe Biden is pushing to defund the police. Though Facebook slapped both videos with labels indicating they were false, the company’s own public archive showed that the super PAC didn’t appear to lose ad privileges, the Post reports. Engagement data from the Facebook-owned social media analysis tool CrowdTangle showed zero evidence that the PAC’s traffic or post distribution dipped either.

Even more worrying, in some cases Facebook failed to flag debunked posts at all when they came from conservative sources. Talk radio host Rush Limbaugh shared a bogus theory with his 2.3 million followers about how the nation’s chief infectious disease expert, Dr. Anthony Fauci, secretly owns half the patent for a covid-19 vaccine. Facebook didn’t apply a label to his post despite the fact that the company’s own fact-checkers debunked it, the Post reported. Another one of Limbaugh’s posts about a Biden conspiracy theory was similarly overlooked. Other conservative pages, including those of the right-wing news outlet the Gateway Pundit and conservative blogger Pamela Geller, also appeared to avoid penalties despite posting content that had been proven false by Facebook’s fact-checkers.
Click to expand...

To be clear, I started this thread based on the mocking phrase of "Look at TF guy". That's not to under sell that those in this thread are in my opinion just some sheer opportunistically evil people. Examples: 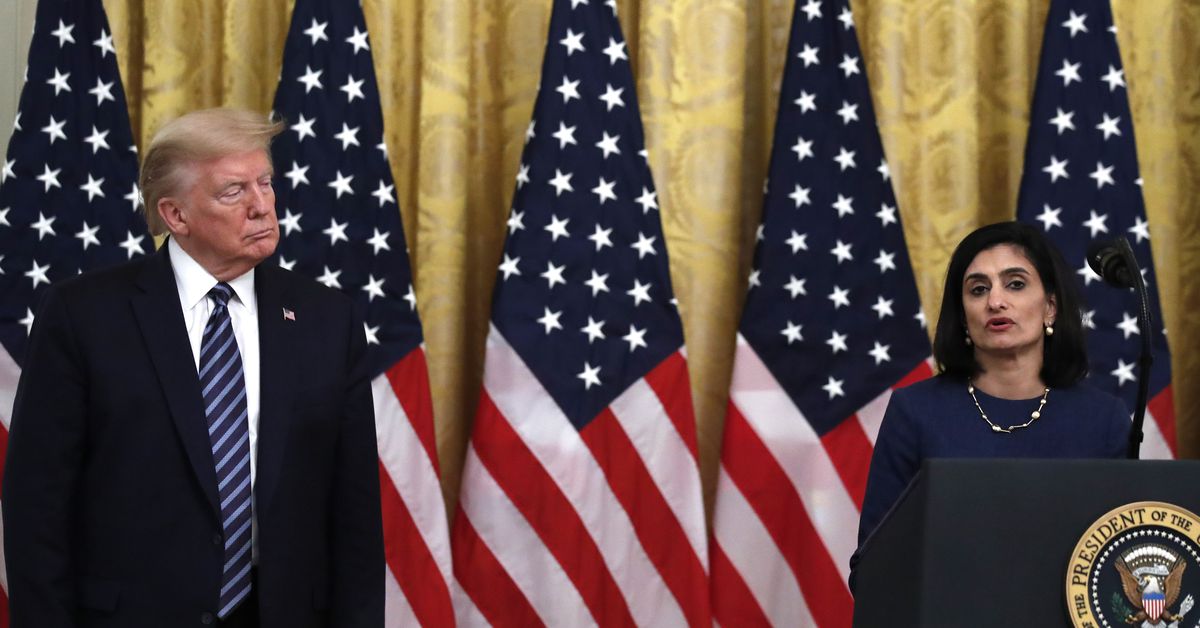 On election eve, the Trump administration is still working to roll back Obamacare.

HealthCare.gov is the face of Obamacare, the online marketplace where millions of Americans sign up for health insurance — and now, two days before the 2020 election, the Trump administration has approved a plan to scrap the website in the swing state of Georgia.

In a Sunday announcement, which is highly unusual timing, as several health care experts noted, the US Department of Health and Human Services announced it had approved a plan from Georgia Gov. Brian Kemp to close HealthCare.gov to his state’s residents. They will instead be asked to shop for health insurance through brokers or on private websites.
Click to expand...

“The Obamacare Exchanges have not worked for Georgians, leaving them with fewer options and skyrocketing premiums,” CMS Administrator Seema Verma said in a Sunday statement. “Today’s approval of the state’s waiver will usher in a groundswell of healthcare innovation that will deliver lower costs, better care, and more choice to Georgians in the individual market.”

That statement is untrue on both counts. Georgia’s uninsured rate today is 5 points lower today (13.7 percent) than it was before Obamacare took full effect (18.8 percent in 2013). More than 430,000 Georgians buy their health insurance through HealthCare.gov, and almost all of them receive premium subsidies created by the health care law. The reason the state’s uninsured rate isn’t even lower is its Republican leaders had refused to expand Medicaid through Obamacare, leaving 240,000 people without coverage. (We’ll come back to this in a moment.)

So, contrary to Verma’s claims, the ACA provided a lot of people in Georgia with health coverage. Moreover, experts expect thousands of people in the state could lose coverage as a result of this new waiver.
Click to expand...

When I've had to design some realistic evil looking people, I have turned to this administration for inspiration. From Mnuchin & wife, Miller, Betsy D, and Seema Verma. For Fuck sake, how do you do this to people?

Twitter dropped a hammer on Bannon. YouTube followed suit. So there are some things one just can't expect a social media site to tolerate after all. Talking about sticking heads of government officials on a pike is apparently a bridge too far.

It's been a minute so we will ease back into this, with a well earned favorite

JayMysteri0 said:
It's been a minute so we will ease back into this, with a well earned favorite

Infuriating really. McConnell needs to explain himself on this... and on resistance to election security in general. The Newsweek piece cited in that tweet notes that Mitch's actions are opposite to what one might expect, considering that reports on committee led by Republicans had noted Russian interference in 2016 in all 50 states... and also that even the lobbyists who dropped dough on Mitch might be interested in the money they could get if states were given more federal grants to update their old voting equipment. Yet McConnell ended up tabling some election security bills claiming they were too partisan.

"It's not surprising to me that Mitch McConnell is receiving these campaign contributions," the Brennan Center for Justice's Lawrence Norden told Sludge last month. "He seems single-handedly to be standing in the way of anything passing in Congress around election security, and that includes things that the vendors might want, like money for the states to replace antiquated equipment."

McConnell's actions seemed even more out of balance with his party, as the Senate Intelligence Committee⁠—led by Republicans⁠—released a report later on Thursday claiming Russians have targeted voting systems in all 50 states in 2016. Though there was no evidence votes were changed, in Illinois "Russian cyberactors were in a position to delete or change voter data."
Click to expand...

JayMysteri0 said:
What exactly is too far for Zuck?
Click to expand...

I try mentally to blur out Bannon himself as the recipient of Zuckerberg's generosity, figuring Bannon is a pretty polarizing guy and has certainly landed in the far negative zone of public opinion held by many of us. So I try to think about just the language used in the post that stirred up such a ruckus.


(I mean, personally, this: Bannon could say "good morning" and I'd be repulsed.)​
But I can't get past Zuckerberg allowing anyone to propose putting pols' heads on spikes. Toying with the edges of what means "incitement to violence" on this behemoth of a social media platform in the recent, current and likely ongoing political climate around the world is just so irresponsible.

Bannon and others of his ilk but somewhat lower profile have become masterful trolls of people even attempting to be thoughtful --and yes, to thread needles, as Twitter does-- regarding limits on public speech posted on privately owned social media sites. That constant trolling is why I don't even try to avoid blanket castigation of the far right any more, as well as of all their damn bots and bot-like followers. I give no benefit of doubt now. Can't spare it: they almost wore that out in 2015-16 and the past four years, 2020 rhetoric in particular, have yet again gone beyond the pale too often.

So then what of Zuckerberg? Should ask himself if he can step back from concerns over FB's revenue streams for a moment. Let him consider just the sheer weight of hateful urging towards violence that violent speech "metaphors" --as some insist on calling such language in posts and tweets-- dump into our discourse with each other every day all around the planet. It can remind of the bad old days along the Cuyahoga River, where all it took was one more pint of petrol effluent and a carelessly tossed cigarette butt and the river itself would catch fire again.

A plural version, these F'n guys

JayMysteri0 said:
It's been a minute so we will ease back into this, with a well earned favorite

The voting fraud danger has always been in the infastructure controlled by the powers that be, not rank and file voters. Yet tons of projection from the GOP about the nature and threat of voter fraud To fool their suckers And facilitate vote suppression.
Last edited: Nov 14, 2020

Well and Capitol Security staff should not be endangered either. Behold one newly elected woman who disses masking: none other than Marjorie Taylor Greene, already notorious for her past QAnon affiliation. But this is really something, she not only thinks little of the value of masks but brags on that to other incoming reps. No wallflower, Ms. Greene. Not even sworn in yet and making her mark as a hyperpartisan, selfish Republican.

lizkat said:
Well and Capitol Security staff should not be endangered either. Behold one newly elected woman who disses masking: none other than Marjorie Taylor Greene, already notorious for her past QAnon affiliation. But this is really something, she not only thinks little of the value of masks but brags on that to other incoming reps. No wallflower, Ms. Greene. Not even sworn in yet and making her mark as a hyperpartisan, selfish Republican.

The Georgia that just surpassed their May High COVID infection rate. She’s trying to set up her own little Koolaid stand on the Capital steps. 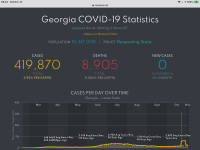