I've been hearing a lot of this, seems to be making quite the comeback now

Release the kraken is trending and someone posted this

If we make it to Jan 20th then we will forever be indebted to Trump for allowing us to survive his kamakazi presidency. Thank you, Mr President.

Colbert trying to be fair always good for a laugh these days.

Loved the online pancakes crash of the DC protest today, should do it again whenever the protest against recount outcomes materializes.

Vanity Fair has one of the funniest articles I’ve read in a long time.

Eight days after the 2020 election and four days after the major networks called the presidency for Joe Biden, here’s where we’re at: Donald Trump has refused to accept that he lost and is acting as though he’s just going to keep being president on January 20, 2021. In addition to ranting and raving about made-up election fraud and insisting that he was cheated, Trump has forced his staff and allies to treat him like a highly sensitive toddler who could blow at any moment and therefore can’t be sat down and told to cut the shit. His secretary of state is saying things like, “There will be a smooth transition to a second Trump administration.” The head of the General Services Administration won’t sign the paperwork necessary to release millions of dollars, amongst other resources, to Biden’s transition team. The White House has told federal agencies to keep working on a fiscal year budget due after the inauguration. The Presidential Personnel Office is still vetting prospective hires. At this point it’s not clear if Trump needs to be thrown in prison or a mental institution.​
And according to a new report, the absolute best we can probably hope for is that the soon-to-be ex-president will refuse to concede until the day he dies, but won’t, like, declare squatters’ rights to the White House on January 21, or scream, “You can’t make me leave! You can’t! I won’t!” as the Secret Service pries his fingers off the doorframe of the Oval Office, calling for backup as he tries to bite one agent and kick another in the shins before being tackled to the ground.​

This cartoon is from way earlier, but who knew the GOP would hang in at peak intransigence for so long.

Bernie is not playing. 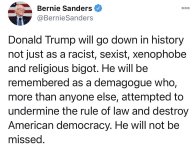 Australians say it like it is (warning it's very catchy):

Every Republican pol still up for Trump should have memory refreshed by watching that video, just in case they're deluded enough to think they're supporting someone Trump never was and never will be.
S

Hah... and I never thought before about his "president for life" gig as having begun on his birth date.

I'm ready for this.

despondentdiver said:
Australians say it like it is (warning it's very catchy):

That is brilliant! The sad thing about Trump Humor threads is they are at best, black comedy.

Despite the crap associated with him, I still enjoy Brian Williams, and this is A reason why