Trump sues everyone - demands to be back on social media

Aside from all the lingering unhelpful effects of Trump's actual presidency, he remains such an embarrassment.


Fast forward to American history class in middle school down the road aways:

the man would sue a golf ball if it it would not go into the hole. he kinda forgot he ok'd the terms of service that he broke often.. what what idiots will do the work for no pay?

I've said this before, the right wants to be the cool kids or accepted amongst the cool kids as equals. They weren't before and they most definitely won't be now. You can't whine or sue your way into being cool.

Trump is a perfect example of this and another reason he is their leader. He's been a joke amongst his peers in both business and entertainment for decades. He's been tolerated, not respected and he doesn't grasp that. He thinks respect comes from a certain facade which in fact is often the target of jokes. This also comes through with who he (they) surround themselves with, or maybe I'll say who can tolerate being around them, be it shady business people or white supremacists. If you're an extrovert who craves attention but everybody who gravitates towards you is repugnant while more respectable people keep you at arms length then maybe you're the problem.

lizkat said:
Aside from all the lingering unhelpful effects of Trump's actual presidency, he remains such an embarrassment.


Fast forward to American history class in middle school down the road aways:

I could imagine that essay as a set High School, or First Year politics (or history) university topic.

And - perhaps I have just been away from the classroom and its attendant grading activities for far too long - I would almost pay to be the - a - person grading it.

He wants back cause he needs the attention.


Exactly. He's watching these alternatives fail, including his, and is now "Whhhaaaaaaa!!! Let me back in!! You need me!!" Nobody needs you. Not even these alternative services. They're perfectly capable of spreading their ignorance, hatred, and racism without you.

I bet the grifting /begging for legal donation letters have started pouring out of his email account.


Trump is just pathetic. Almost as pathetic as the pieces of work in the factions of the GOP who figure "in for a penny, in for a pound" as long as Trump retains vocal supporters and the fawning attention of Fox News.

Well it's been a long way down for that party. These clowns make mediocre past officials of the GOP look principled.

On balance my problem with all these guys (and women) is that they themselves are not leaders but followers in the cult-like elevation of Donald Trump. Yet their constituents take their own political activism cues --and indeed their understandings of our constitution and purpose of government operations-- from the public statements and behavior in office of these reprehensible Trump sycophants sitting in the U.S. Senate and House of Representatives. And Donald Trump remains ignorant to this day of how the constitution says American government must function.

The current crop of Trump-favoring elected officials clearly don't respect the federal government of which they are a part, rather apparently take delight in weakening its ability to function, all the better (they assume, I suppose) to make it possible for each state's legislature to write the rules of the road.

But an entire country of balkanized states --30 or so of which now openly pander to the lowest common denominator of views held by their respective right-leaning voters-- cannot remain a global superpower for much longer.

Yet somehow these voters do not see their collective behavior as underwriting the ongoing rise of China, which is now (and nationally) focused like a laser beam on applying abroad the growing economic power of its own middle class in order to advance its interests as a nation.

Meanwhile, shall we inquire precisely what are the actual interests of.... western North Carolina, or southern Missouri? Surely there's more to their hearts' desire and needs of family than to own a "Fuck Biden!" flag in 2021.

I'll never understand really how this destructive cult of Trump came to pass, and not for lack of trying. I realize "it's complicated" and didn't hatch out after some rainstorm in the summer of 2015. But I know that Fox News bears some culpability over the years for helping dumb down voters who insist on calling themselves conservative. Fox News has never once offered to tell Trump voters that unless they are extremely wealthy, their nominal head of party ran a catastrophically failed presidency, effects of which will reverberate for years down the road yet no matter who sits in the White House now or in future.

The only thing the GOP wishes to conserve is political power of a dwindling base of voters. And clearly, there's no depth to which they won't sink in order to do that. Donald Trump himself is no conservative, was never more than an opportunist. But he's still the golden boy in a large faction of the GOP, as long as he has followers (or maybe only as long as it doesn't become totally unseemly to support his nominal "leadership" of his piece of the Republican Party).

No wonder Trump keeps trying to launch a viable social media platform, and no wonder he's suing to try to get privileges back on Facebook or Twitter. If he can't manage to do that, his endorsements for 2022 won't be worth accepting. He has way too much downside and too little actual power now to keep the middlemen, the Trump-following congress critters, on his side for much longer.... unless he can prove he still commands the interest of millions of likely voters.

Trump also blocked me on Twitter (yes really), who do I sue?

Eric said:
Trump also blocked me on Twitter (yes really), who do I sue?

he got in trouble for that but did it ever change?

fooferdoggie said:
the man would sue a golf ball if it it would not go into the hole. he kinda forgot he ok'd the terms of service that he broke often.. what what idiots will do the work for no pay?
Click to expand...

I couldn’t help but think of this

Eric said:
Trump also blocked me on Twitter (yes really), who do I sue?
Click to expand...


Damn, I'd almost chip in for the legal fund!

If we start hearing daily reports of his ravings, my spirits will go into the dumpster.
U

This latest lawsuit is DOA for multiple reasons:

1. Wrong jurisdiction - IIRC all the main players state that lawsuits have to to be filed in various CA based courts.
2. None of the companies are public utilities.
3. Only the courts certify if a case is a Class Action.
4. There is no definable financial loss, you can't sue for hurt feelings.

And what is it with half the lawyers having AOL email addresses? He using Wee, Kluless and Run Legal Partners LLC again?

fooferdoggie said:
I bet the grifting /begging for legal donation letters have started pouring out of his email account.
Click to expand...

They have begun. Watch your spam filter for yours.

Eric said:
Trump also blocked me on Twitter (yes really), who do I sue?

Would I be wrong to suspect a very large number of citizens are blocked from AssHat’s account,

Alli said:
They have begun. Watch your spam filter for yours.
Click to expand...

my filters are smarter then trump well my dog is smarter too so I guess thats not saying much.

Alli said:
They have begun. Watch your spam filter for yours.
Click to expand...

For the minions who are now wondering if their master is really not that bright or are convinced he is being treated unfairly, please donate to the poor, pathetic, corrupt Head POS who got his malfeasant money laundering enterprise into a wringer. 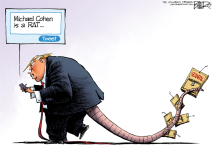 The End is Nigh (For Trump Media and Technology Group)

White House correspondents dinner is back