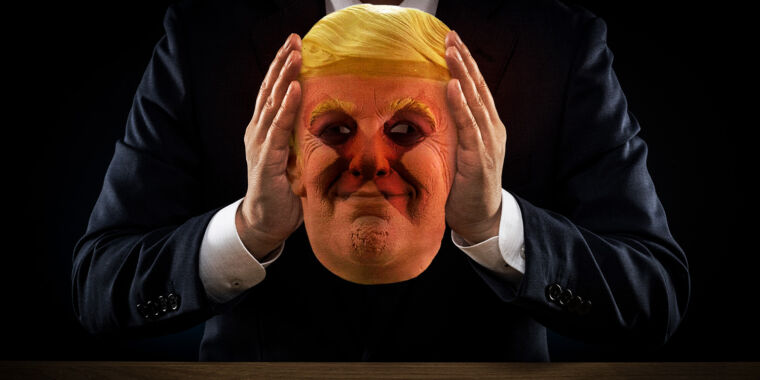 He was hired to build a fake news op but now wants to put things right.

He was hired to build a fake news op but now wants to put things right.

I'm torn by this.

Is the real need to come out, because they know there are no personal consequences for their actions?

Because it's not like there's going to be any thanks for exposing the system they created that we are still feeling the damage from.

JayMysteri0 said:
I'm torn by this.

Is the real need to come out, because they know there are no personal consequences for their actions?

Because it's not like there's going to be any thanks for exposing the system they created that we are still feeling the damage from.
Click to expand...


I really don't know who to be mad at, at this point. This was quite the elaborate operation, but I feel some people on the right would give just as much authoritative validation to a man loitering outside a 7-11 in a Trump shirt. He probably could have gotten the same result with 90% less effort. For some people, the more suspect the source the more trustworthy it is.
U

theSeb said:
Piece of shit now desperately tries to update his CV and claims to be a mastermind when he was a cog that got played as a complete and utter rube. I suspect that he worked for natural news.

Blaming his autism and the boohoo story of his father was a neat touch. A pathological liar through and through.

here is the actual mastermind. Clearly a humble guy... this is comedy gold


Not saying this out of disrespect, but I have no clue what you are talking about there. But I would like to know.


Wow. That's a real shit show of the highest order. That could probably be titled "Lies the media doesn't want you to know about!" and the readers wouldn't see that as a sign they are getting trolled.
U

theSeb said:
Sorry. I naturally assume that everyone followed the 19 pages of comments on ars technica where we shit all over the article and did some old fashioned sleuthing to find out exactly what is going on here. The company that "Hacker X" was trying to hide is most likely to be NaturalNews, which is owned by Mike Adams. Where he gets his funding from is unknown at this point in time, but he's been in the bullshit game for a long time.

There is no evidence that Rob was ever a hacker of any kind. He did work at Threatcare as an "Enterprise security consultant", but that is meaningless. He was a digital strategist, wrote some articles at natural news and sister sites and did basic SEO (search engine optimisation) after being hired to work for Adams' company in 2015.

Luckily a kind soul has summarised everything we found today

Why did Ars publish this poorly written story with little research by an author (Ax Sharma) who has never graced their pages before?

Why did they choose such a bs title which makes Willis seem like the mastermind fake news empire builder when he was just one cog in the machine?

Willis claims to have lived in a state "destroyed by democrats". He lived in Connecticut. I understand there are no smoking craters there left by the democrats.

Willis claims to have grown up as the only white kid on the bus... this makes little sense when taking note of his hometown

Willis claims to be a social liberal but a fiscal conservative. That's a bs statement that young stupid white men make.

Willis tries to diminish Russian involvement in fake news, as if he knows everything about fake news when he was just a small part of the bs machine. Why?

and so forth and so forth. What it comes down to really is that Rob got paid and left but now feels bad because his daddy believes in the bullshit that he helped to spread. Crocodile tears.
Click to expand...


Thanks for the explanation. Sounds like there is a lot going on there that is suspect and I don't know if I've ever seen such rapid BS calling from commenters, which admittedly I didn't read.
U

Trump what the fuck is wrong with him?