Donald Trump is seriously considering a pardon for Joe Exotic.

The president's first postelection pardon, of his first national security adviser, former Lt. Gen. Michael Flynn, has been described by sources as the beginning of a trend. The president is expected to announce more pardons over the coming weeks and will not necessarily wait until his last days in office as former presidents have typically done, sources involved in the deliberations say.

"We've heard from the Tiger King," said one source, who added, "You wouldn't believe the amount of calls, some insane, we've gotten."

"We are waiting on the pen to hit the paper, we think we are very, very close," Eric Love, an attorney for Joseph Maldano-Passage, aka Tiger King Joe Exotic, said about a potential presidential pardon.
Click to expand... 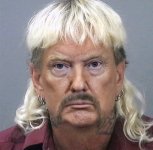 Photo courtesy of Twitter (cannot stop laughing at this)

Chew Toy McCoy said:
Do it.
Click to expand...

I honestly don't care one way or the other about Joe but the fact that Carole Baskin is still out there is flat out criminal, she clearly murdered her husband and here she is on Dancing with the Stars getting all of this popularity and fame. Talk about a slap in the face to his family.
Last edited: Dec 3, 2020

How much did he pay trump?

fooferdoggie said:
How much did he pay trump?
Click to expand...

I imagine he’s broke but he’d fit right in at a Trump rally (aside from the openly gay thing). If it scores points with his base I can see Trump pulling the trigger on a pardon.

I'm glad I never watched this show on Netflix lol

And you'll lose less brain cells as a result lol. That said it was the most bizarre thing I've ever seen and they hook you in, just when you think it couldn't get any crazier they hit you with another bombshell.